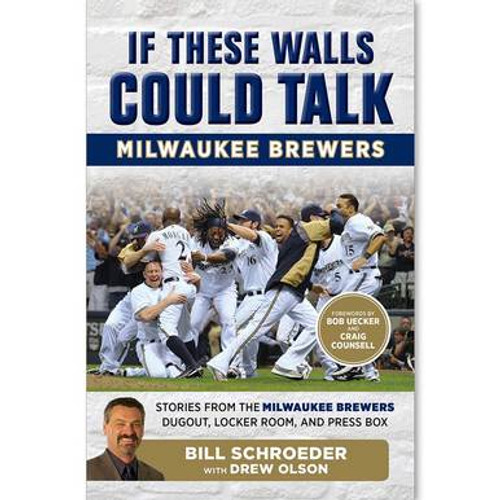 If These Walls Could Talk is a comprehensive account of the Milwaukee Brewers baseball team. The book chronicles the Brewers from the Suds Series of 1982 to the 2011 National League Central title, and from Bambi's Bombers of the late 1970's to Harvey's Wallbangers of the early 1980's. Bill Schroeder, a longtime Brewers color commentator and former Brewers catcher, provides insight into the Brewers inner sanctum as only he can, with additions from Drew Olson. Foreword is by Craig Counsell and Bob Uecker. Read about what goes on in the equipment and training rooms, how batting practice can be chaotic, what it's like to travel with the team and off-the-wall anecdotes like the time Steve Sparks injured his shoulder trying to rip a phone book in half after listening to a motivational speaker. Paperback book (5.5 in. x 8.5 in.) contains 56 pages of content. ISBN: 9781629372037

This book offered at 20% off retail on WisconsinMade.

Bill Schroeder is the color commentator for the Milwaukee Brewers, a position he has held since 1995. He spent eight seasons in the big leagues with the Brewers and California Angels, posting a career-best .332 batting average in 1987. Born in Baltimore and raised in Princeton, New Jersey, Schroeder graduated from West Windsor Plainsboro High School, where he earned All-State honors his junior and senior years. He attended Clemson University, leading the Tigers to the Atlantic Coast Conference title in 1978 and 1979. He and his wife, Kate, reside in New Berlin, Wisconsin.