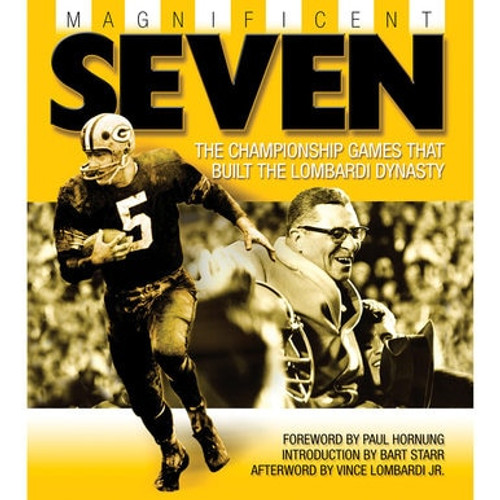 The Magnificent Seven is a book about the championship games that built the Lombardi dynasty in the 1960's. No other coach, franchise and city have been as linked as Vince Lombardi and the Green Bay Packers were in the 1960s. The winners of five titles in seven years, the Packers were the dominant team in the NFL under Lombardi. No other book has ever looked at the championships that built the Packers' mystique. Written by Bud Lea with a forward by Paul Hornung, introduction by Bart Starr, and afterward by Vince Lombardi, Jr., The Magnificent Seven was published in 2004, but still offers a unique look at the Green Bay Packers of the 1960's. The book is perfect for every true Packer fan.

Bud Lea was the Milwaukee Sentinel's beat writer for the Packers from 1954-72 before being the paper's sports editor from 1972-80 and sports columnist from 1980-95. A native of Green Bay and a reporter or editor in Wisconsin for more than five decades, Lea lives with his wife, Filomena, in Glendale, Wisconsin.

The Kid Who Climbed the Tarzan Tree - Book

The Fire Within - Book

Milwaukee Then and Now - Book