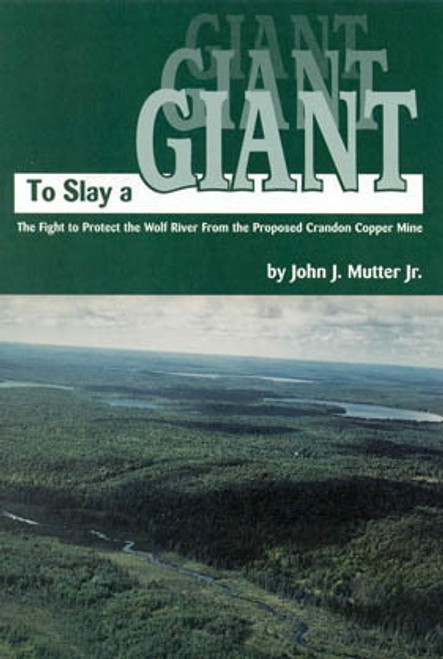 To Slay a Giant, written by John J. Mutter, Jr., is about the two-year struggle to get a Sulfide Mining Moratorium Bill passed into law in Wisconsin. Exxon had discovered the ore body in 1975 and wanted desperately to get the permits to mine gold, silver, copper and zinc near Crandon, Wisconsin. But many people were skeptical because this huge mining venture was so close to the headwaters of the pristine Wolf River. The proposed mine site was even closer to a small American Indian tribe which feared the end of their existence should the project be approved. All the pieces were in place for arguably the largest issue the State of Wisconsin had ever had to deal with. Common everyday people, along with professional, concerned citizens from all parts of the state joined hands with their ancestral American neighbors to challenge one of the wealthiest corporations in the world. This was a classic environmental confrontation, it was as grassroots as it gets.

John J. Mutter, Jr., an award-winning writer, was in the environmental trenches during this fight. He tells what happened and reveals many occurrences that the news media never found out about. To Slay a Giant is an important book for anyone who is concerned about our environment and the protection of planet Earth! He has been published in many newspapers and magazines and has written several books. Born in Racine, Wisconsin in 1943, he spent his childhood there. In 1961, he joined the Navy which took him from Great Lakes, Illinois for boot camp to Patuxent River, Maryland for shore duty to Little Creek, Virginia on amphibious ships. He also participated in the first bomb shelter test. He worked as a merchant seaman on ships headquartered in Oakland, California. A Vietnam War veteran, he began his blue collar life working in a variety of jobs including machine shop attendant, gas station worker, paper mill employee, bartender, construction worker, security guard, car mechanic, bailiff, grave digger, and meat counter attendant in a super market. His last full-time job was 15 years as a power plant operator at a maximum security prison in Green Bay, Wisconsin. His life-long dream of becoming a writer was fulfilled after he attended a one-week school for creative writing in 1980. Since that time, he has become known as a storyteller, activist, environmentalist, historian, speaker, trophy winning pool player, outdoorsman, biographer and award winning writer.

Duffy, The Tale of a Terrier - Book

Let's Get Ready For Kindergarten - Book