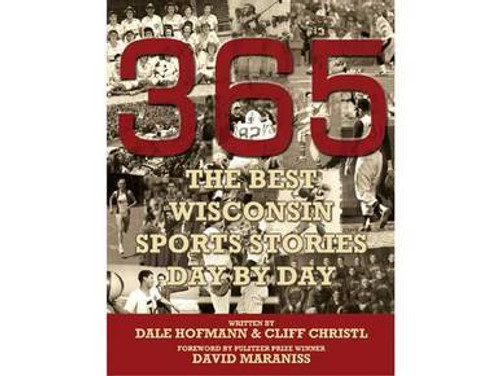 The book 365 - The Best Wisconsin Sports Stories Day by Day documents the number one sports story for each calendar day of the year taken from over 70 years worth of great Wisconsin sports stories. Authors Cliff Christl and Dale Hofmann have chosen the most intriguing stories for their book, with a foreword by David Maraniss. Whether it's as recent as Brett Favre's return to Green Bay as a Minnesota Viking or as historical as Borchert Field opening in Milwaukee in 1889, it's all Wisconsin, and it’s all there in 365.

Cliff Christl was born in Green Bay, Wisconsin and graduated from the University of Wisconsin-Oshkosh. He became a sports writer and spent 12 years covering the Green Bay Packers in the 1970's and 1980's. The National Sportscasters and Sportswriters Association has named Cliff Christl Wisconsin Sportswriter of the Year five times, and he's placed in the top ten in the national Associated Press Sports Editors contest twice in the enterprise writing category.

Dale Hofmann, a Northwestern University graduate, has covered every major sport as a columnist for the Milwaukee Sentinel and Milwaukee Journal Sentinel from the Super Bowl to the World Series to the Olympics. A member of the Milwaukee Press Club Hall of Fame, he has won numerous state, local and national writing awards.

A Gift of Wood