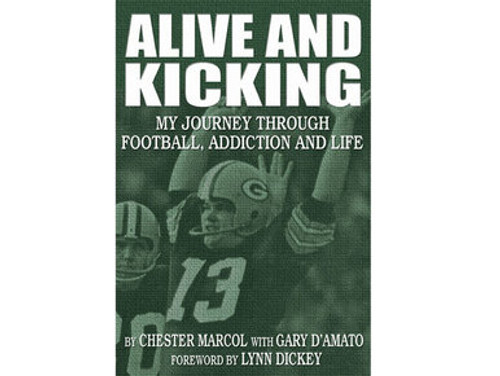 Alive and Kicking: My Journey Through Football, Addiction and Life is a book by and about Chester Marcol, a Polish immigrant who played for the Green Bay Packers in the 1970's. One of the top place-kickers in the game, he was rookie of the year in 1972. Written along with Gary D'Amato, Marcol talks about the hurdles he overcame as a Polish immigrant to become an NFL star and provides a no-holds -barred look at his alcohol and substance abuse that cost him his football career and family. Foreword is by Lynn Dickey. Hardcover book (6 by 9 in.) contains 200 pages of content, including an 8-page photo section.

Chester Marcol, a Polish immigrant, made a splash as a soccer-style rookie kicker with the Green Bay Packers in 1972, leading the National Football League in scoring and earning rookie of the year honors. He led the league in scoring again in 1974 and was a two-time All-Pro kicker. Known as the Polish Prince he was one of the most popular Packers throughout the 1970s. He was released early in the 1980 season and began a long and harrowing descent into alcoholism and drug abuse. Today, he works as a drug and alcohol abuse counselor in Michigan's Upper Peninsula, where he lives with his wife and three children. Marcol was inducted into the Packers Hall of Fame in 1987.

Gary D'Amato covers the Green Bay Packers, golf and the Olympic Games for the Milwaukee Journal Sentinel. He is a three-time Wisconsin Sportswriter of the Year and has won several national awards. D'Amato has co-authored other books about the Packers. He lives in Caledonia, Wisconsin with his family.