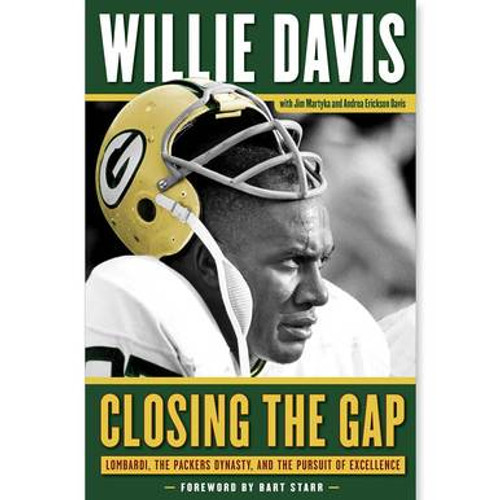 Closing the Gap is an autobiography of Willie Davis, the NFL great who helped define the hard-nosed, in-your-face defense of the original football dynasty, the 1960's Green Bay Packers. This book also illustrates his persona off the field where he had a reputation of strict discipline that matched his leadership mentality. The book recounts the competitor as one of the game's strongest, quickest, and most agile defensive linemen in his time, showcasing a team captain who led the Green and Gold to five championships and earned a bust in the Pro Football Hall of Fame. Distinguished from many other athletes of his generation, Davis's success continued well after he took off his pads. His reputation as one of the most respected businessmen in America is discussed, including his time serving on the board of directors for Fortune 500 companies, taking part in various foundations, and speaking to audiences of all ages about his experiences. From growing up in a poor, segregated small town in the South to the intense pressure he endured as a college athlete contemplating his future, this evocation pays homage to a man who worked hard to achieve all that he had, always appreciating the fruits of his labors with care, respect, and devout passion. This book was published in 2012.

Willie Davis was a businessman and a former NFL football star who played with the Cleveland Browns and Green Bay Packers. He was ranked by the Sporting News as one of the top 100 greatest football players.
Jim Martyka is a professional freelance writer, a ghostwriter, and an editor. He lives in Los Angeles.
Andrea Erickson Davis is a professional freelance writer, editor, artist, and community activist based in Southern California.
Bart Starr was a Pro Football Hall of Fame quarterback who led the Green Bay Packers to five championships in the 1960s under head coach Vince Lombardi.

Not in the Mooood Wall Calendar