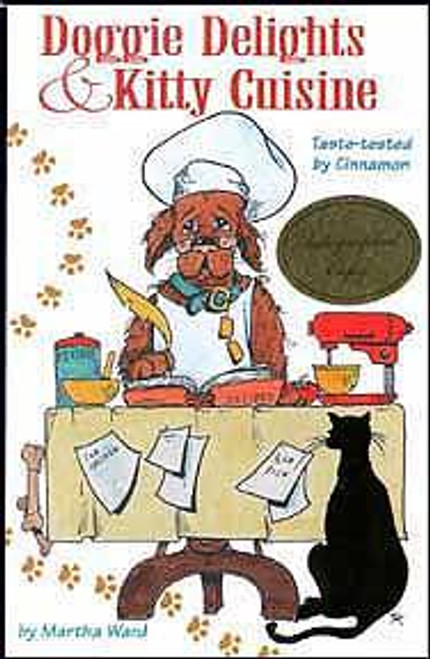 This Doggie Delights & Kitty Cuisine recipe book by Martha Ward is another way to show your "best friends" you love them. Home baked, using natural ingredients, these treats are quick and fun to make. Ingredients such as rye and wheat flours, rolled oats, molasses, honey and nuts make it easy to mix up An Apple a Day, This Little Piggy and Show Me the Honey, to name a few, for your canine friends. Man's best feline friend will also enjoy homemade treats. Using a variety of ingredients such as catnip, pasta and seafood, cat lovers will discover crunchy cuisine that pleases critical kitties. Cats find Happy as a Clam and Cat Nippers treats simply "purrfect."

All recipes were taste-tested by Cinnamon, a gentle, loving and intelligent golden retriever, her cat and dog relatives and friends. Cinnamon inspired her people-mom, Martha Ward, to make home baked treats and soon became the official taste-tester. Treats were often shared with friends and given as gifts to friends with pets. The result was a "tailwagging" success, so Martha and Cinnamon decided to put "pen and paw" together and created Doggie Delights & Kitty Cuisine. At the request of "publicity hounds," anecdotes about Cinnamon and her playmates were included to complement the snacking atmosphere.

Cinnamon and her family reside at Crystal Lake in rural Wisconsin. Her "mom," Martha Ward, is a recently retired language therapist who teamed with Cinnamon to produce Doggie Delights & Kitty Cuisine. A retired otolaryngologiet, Cinnamon's "dad," Richard, offers Suggestions on the art of under-the-pier fishing. Susan and Jeff, her "sister" and "brother"; are university students majoring in nursing -and communications who teach Cinnamon tricks and swim with her.

Life in the Northwoods Calendar